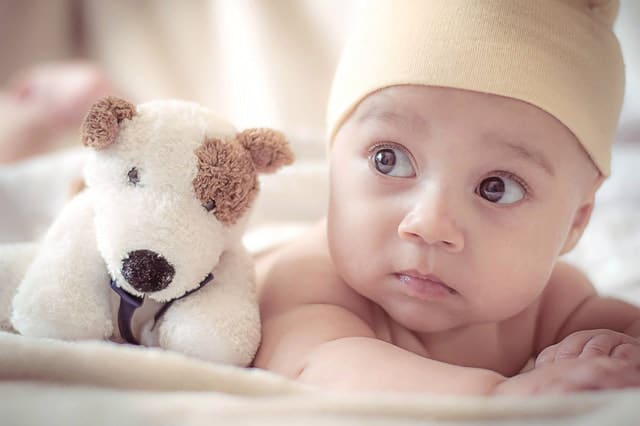 An infant’s digestive system is in the developing stages when he’s still learning how to eat and digest his feed. So why does my baby spit up when laid down?

This is not a matter to worry about, as developing babies often spit up when they’re laid down.

In this article, you’ll find why babies spit up and how to control the situation.

Baby Spits Up When Laid Down

Newborns are still in the process of learning how to drink milk and how to digest it.

In the process, sometimes the milk flow can be too fast, or the bottle nipple might be having a large hole.

Let’s see why the baby spits up when laid down.

Spitting up in babies is referred to as gastroesophageal reflux by doctors.

When the baby’s stomach sends the milk or solid feedback into the esophagus, it is referred to as reflux.

Note this clearly – reflux is very different from vomiting. Vomiting causes a lot of pain and weakness. But spitting up is often left unnoticed by parents.

Babies tend to spit up when laid down as their digestive system is still in the process of developing.

When the milk flow is too fast, or the baby swallows air along with the milk, spitting up is a result.

Babies also spit up when you haven’t made them burp. So, burping the baby is essential so that he won’t throw up everything once laid down.

But, if you didn’t burp the baby and lie him down, he will spit up his feed.

Till the baby starts eating solid food (after six months), spitting up a common scenario.

As I said earlier, spitting up is common till the baby is feeding only on milk. I know that the spitting up of your little one scares you at times.

Let’s see why spit-ups are so common in newborns.

When the baby’s tummy is full, and you still force him to finish up the bottle, there are chances that he might spit-up.

With the onset of maturity in the baby’s gastrointestinal tract, the spit-ups will start vanishing.

It is possible that during bedtime, you’re feeding the baby too quickly.

Then, as you lie him down, he may spit up because he’s either drank too much milk or swallowed air.

2. Overfeeding And Not Burping The Baby?

Overfeeding is one of the most common reasons why a baby spits up when laid down.

Babies will keep on drinking the milk as long as you’re happy feeding them. They don’t know when to stop.

So, when you overfeed the baby at night and lie him down, he may spit up.

Without making the baby burp and lying him down may be the cause of his spitting up.

Burping is essential to let the air out, which your infant must’ve swallowed along with the milk.

When you don’t burp him, the air will create gas inside his stomach, pushing everything in his stomach through the esophagus again.

Related Post: How To Burp A Newborn That Wont Burp

So, what to do to reduce your baby’s spit-ups?

Keep your baby in an upright position after you’re done feeding him. This way, he’ll also get a chance to burp, which is essential for every infant.

Make sure that you maintain a healthy feeding routine for your little one. This means that you must feed him timely, i.e., every 2 to 3 hours.

This is because if the baby gets very hungry, he’ll drink more milk and swallow less air along with it.

Don’t worry if your baby spits up when laid down. It is quite common with newborns up to 6 months of age.

However, you can surely try to reduce the spit-ups as much as possible. After all, no parent wants their kid to throw up his feed again and again.

What To Do When A Baby Spits Up Lying Down?

To prevent the baby’s spit-ups, you must feed him in an upright position. Or you can lift his head a little bit so that milk goes directly into his tummy.

And after you’re done feeding him, don’t forget to make him burp.

Is It Okay For The Baby To Spit Up While Sleeping?

It is a ridiculous myth that babies can choke if they spit up while sleeping.

The baby will not vomit while sleeping unless you had fed him earlier and hadn’t made him burp. But don’t worry, most babies don’t spit up while sleeping.

Should I Feed My Baby Again If He Spits Up?

Spit-ups and vomiting are quite common in developing infants. But you should not feed the baby immediately after he spits up or vomits.

Instead, shortly after the baby spits up, feed him the milk to prevent dehydration. 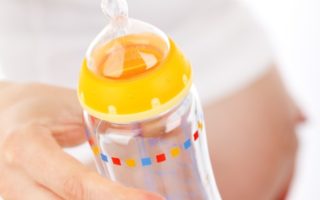 How Long Does It Take For Baby To Adjust To Formula 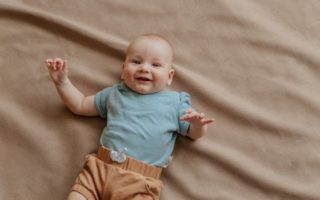 Cornstarch Instead Of Baby Powder 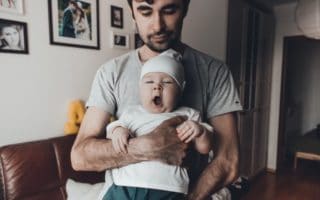 Why Does My Baby Fake Cough